At first glance, two of my DPR Group clients couldn’t seem more dissimilar. One, QuestaWeb, is a software provider and the other, Chapman Cubine Adams + Hussey (CCAH), a direct marketing agency. In representing them, I’ve learned much about global trade and nonprofit marketing techniques across a variety of channels. I never envisioned a scenario where these two business worlds would intersect until I took a call from QuestaWeb in late April 2015. 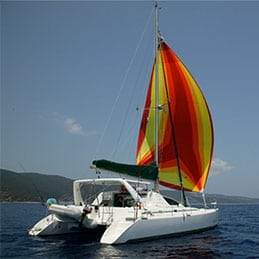 The CEO and COO had an uncharacteristic PR request: they wanted to raise charitable funds. The COO’s wife had been diagnosed with pancreatic cancer and he wanted to turn a negative into a positive. He and the CEO had conceived of a unique event to bring interest to the cause: the CEO would sail from Greece to the United States aboard a 38’ catamaran. Oh, and by the way, the CEO would be setting sail on May 6, about 9 days away.

My mind started to race: How could I tie the two events together? How would I spread the word to potential donors? How would the monies be collected? Most important of all, How could the account team pull off this request successfully in such a short time?

Timing dictated a digital strategy, so we quickly developed a Facebook page and YouTube channel and readied the existing LinkedIn and Twitter accounts for use. A satellite communicator provided a vehicle for the crew to send messages, as well as give the PR team a means to track their progress using GPS coordinates on a map. Email served as the primary means of donor communication, supported by frequent postings to social media. With these details decided, we just needed to designate a charity.

It was then that I recalled a cover story I had placed for CCAH on its work on behalf of City of Hope. Sitting in on the various interviews I found myself impressed both by City of Hope and its fundraising staff. I learned that beyond multichannel direct marketing, CCAH had helped City of Hope develop a peer-to-peer fundraising platform – ourHope – complete with a “how to” video and simple tips to run a successful fundraiser. I placed City of Hope among the charitable institutions recommended for QuestaWeb’s consideration.

When QuestaWeb selected City of Hope, everything else seemed to fall into place. The “QuestaWeb Sails for Pancreatic Cancer” fundraiser was born. We drafted the “My Story” content for the ourHope fundraiser page and created a series of “ask” emails. CCAH’s Vice President of Digital immediately volunteered to discuss strategy with us and review our content from a digital fundraiser’s perspective. She even reached out to the Assistant Director of Development at City of Hope and introduced her to our effort. The relationship thus formed proved beneficial on more than one occasion.

Approximately seven weeks later, the QuestaWeb crew landed in Delaware City, Delaware. At the time of their arrival, our campaign had exceeded the $25,000 goal and was just over $31,200. We had posted three videos to YouTube, weekly items on LinkedIn, over 80 updates each to our fundraising page and Facebook, tweeted over 30 times and sent out two rounds of emails to nearly 10,000 people each time. We developed followings on our social media platforms and found frequent expressions of good wishes extended. It was an exciting time watching our fundraiser unfold and blossom into a success!

Serendipity is a wonderful thing. Two DPR clients that have never met each other were united for a time in pursuit of a higher purpose. One embraced the other’s client and fundraising platform, while the other willingly gave pro bono advice without a second’s hesitation and helped cement a personal relationship. And, a PR account team took on a nontraditional role with absolutely no time to spare and delivered the exact results the client desired. I would call the effort a resounding success. Most important, the quest to cure pancreatic cancer obtained much-needed funds and is that much closer to being realized.

7 key points B2B tech companies should consider to ensure a long-term, successful relationship with their PR and marketing agency.

Let’s talk about your business goals and how integrated PR & Marketing strategies can help you exceed them.

What People Are Saying

At Linortek, we specialize in designing and manufacturing controllers for the Internet of Things, a market involving connecting all type of equipment and devices to the Internet. We made the decision to partner with DPR Group because of the company’s proven track record of securing greater market visibility in the high-tech and manufacturing arenas. In addition, the DPR Group team is flexible enough to adapt their ongoing strategies and programs to help us meet our evolving needs and goals.

In less than six months, DPR Group has helped Protech develop and launch a new website and successfully introduce Protech Cloud Business Solutions to the market. We truly value the expertise and services that the DPR Group team brings to the table and look forward to a long, successful relationship together.

DPR Group’s PR campaigns have helped us increase the visibility of U-TECK’s products for the utility, telecom and construction industries, especially our WeedEnder® vegetation control mattings. Since working with DPR, we have noticed 30% and 50% increases in traffic to our U-TECK and WeedEnder websites, respectively.

DPR Group really understands our industry and the unique role InfinityQS plays in it. They provide both strategic guidance and tactical execution to deliver coverage in key trade publications and exposure with industry analysts and third-party influencers. The team is flexible and always willing to roll up their sleeves to assist us in a wide range of marketing activities beyond our traditional public relations initiatives. DPR Group is more than a vendor. They are a true, trusted and valued partner.

Since 2007, DPR Group has been a trusted business partner providing expert public relations and marketing advice. DPR Group has secured tremendous positive media coverage for our firm, bringing visibility to our software and assisting our sales.

DPR Group’s extensive knowledge and experience in PR and marketing have elevated the Cetrom brand, increased awareness of our services across the industry, and secured numerous award wins and media placements. We value the partnership that has developed and DPR’s contribution to our overall success.

At this point in time, Hermes has a well-established brand throughout Europe, but the company does not have the same level of name recognition in North America. So we decided to partner with DPR Group to let U.S. retailers know about the full range of e-commerce services Hermes offers for e-businesses and international expansion. DPR Group did a fantastic job for Hermes at the Internet Retailer Conference and Exhibition (IRCE), promoting attendance at our sessions and scheduling media interviews before and after. We’ve never had as much press coverage at any U.S. event before. I highly recommend DPR Group to foreign companies seeking to launch their products and services in U.S. markets.

DPR Group is a trusted adviser to both Quality Associates, Inc. and DocPoint Solutions. DPR’s wide range of PR services ensures that our most important news is what our industry views first.

DPR Group has achieved results for DirectMail.com that have far exceeded our initial expectations. We look forward to a long-term relationship with DPR Group as an integral part of our corporate growth goals.

DPR Group has provided valuable public relations insight and helped us increase our marketplace visibility on a local and national level. Our partnership has enabled us to focus on growing our client base, while expanding our messaging and showcasing our unique services.

DPR has been an asset to Barcoding’s marketing department since 2010. Through their expert writing, advice, and connections, we’ve secured local and national media coverage, leveraged the power of search engine optimization (SEO) with a strategy of inbound content marketing, and strengthened our brand’s reputation as a leading systems integrator.